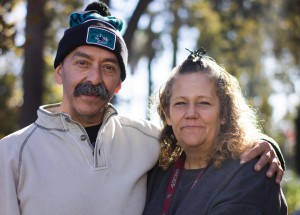 As the winter turns wet and cold, it’s hard not to notice the people living on the streets. Around this time last year, San Jose shut down “The Jungle,” one of the largest homeless encampments in the nation. The forced exit of more than 300 people living along the banks of Coyote Creek garnered international headlines, as well as local coverage.

A year later, The Jungle is fenced off, but thousands of people are still camping out in creekbeds and freeway underpasses all over the city. In the most recent point-in-time survey conducted for the Department of Housing and Urban Development, Santa Clara County had 6,556 homeless people. That represents a drop of more than 1,000 people from 2014, but it’s still a substantial population. San Jose’s share of that was 4,063.

And while Silicon Valley’s explosive economic growth didn’t create the homeless problem, experts say it made it worse for the homeless — and the working poor, who struggle to pay the cost of rising rents. Many of the working poor are just one job loss or health crisis away from becoming homeless themselves.

Brian and Andrea Rodriquez fell into that situation. They used to own a five-bedroom house in San Jose. But a complicated series of job and health setbacks led them from that home to motel rooms, then a car, and then the creeks, including The Jungle.

Brian recalls that day they first wandered into The Jungle. “My wife was clinging to me, but we had nowhere to go,” he says.

He’s 50, she’s 49, and they’ve been homeless for the better part of two years now. These days, you’ll find them camping on the grounds around Grace Baptist Church. Depending on the weather, up to 20 people camp out on this busy streetcorner in return for signing a promise not to drink or take drugs.

Andrea has advanced arthritis. She needs to replace her knees, but even though she has Medi-Cal, she has no place to recuperate from the operations. Brian has Medi-Cal, too. He can’t refrigerate the insulin he takes for diabetes. He’s learned the hard way: If insulin cooks in the South Bay heat, it’s no good.

“He’s been in the hospital several times,” says Andrea

The challenge facing Andrea and Brian is not to become “chronically homeless.” Unlike people who dip in and out of homelessness, the chronically homeless are stuck on the streets, in large part because of serious physical and mental health issues.

To address this problem, many California cities with large homeless populations — Los Angeles, San Francisco and San Diego — have committed to a strategy called “housing first.” The idea is that providing a chronically homeless person a place to live is less expensive for the government in the long run, not to mention a more compassionate approach. Housing first is one of the key concepts in the recently adopted Community Plan to End Homelessness in Santa Clara County 2015-2020.

“For that population, it costs anywhere from $60,000 or $70,000 a person not to be housed,” says Geoff Morgan, president of San Jose-based First Community Housing. “They go to the emergency rooms, sometimes 80 or more times in a year. Or there are police calls. There’s a lot of criminalization of the homeless. People are out on a park bench, and they’re cited for being on a park bench.“

First Community Housing is one of several nonprofits in California that build and manage housing developments specifically for people who would otherwise be chronically homeless. Two blocks from where Brian and Andrea camp, First Community plans to build Second Street Studios: 134 apartments dedicated to permanent supportive housing for the chronically homeless in Santa Clara County. It would be the city’s first housing project totally dedicated to the homeless.

“Permanent” marks a key strategy shift away from emergency shelter beds and transitional housing. “Supportive” also marks a shift. Second Street Studios will have nearly 9,000 square feet of ground-floor space for a health clinic and office space for case managers, one for every 20 residents.

“It’s more efficient, frankly, for service providers to come in and do what they do. They don’t have to travel to individual homes or to people out on the street,” says Morgan.

Permanent supportive housing may be relatively new to San Jose — there are roughly 50 such units in the city now — but you can find numerous examples in California’s other big homeless population centers. They include Connections Housing in San Diego, Lamp Lodge in Los Angeles and the Faulding Hotel in Santa Barbara.

That’s enough money to get the ball rolling, but not enough money to meet the demand. San Jose is still home to 1,400 chronically homeless people. You’d need 10 Second Street Studios to accommodate that population.

What the Neighbors Think

The housing-first approach has support from some in the neighborhood. Aurelia Sanchez, president of the Spartan Keyes Association, says she wants the homeless housed. “You’ll get no argument from me there,” she says.

Sanchez is concerned, however, that her neighborhood not be overly burdened with services and homes for the homeless. She says other neighborhoods have to share in the solutions.

Jennifer Loving can sympathize with Sanchez. “Frankly, no city in our county is doing their fair share of supportive housing,” says the executive director of Destination: Home. “This is a strategy that’s been employed for only four, five years, so it’s just getting underway. We’ve built a lot of affordable housing and it’s still not enough.”

So what’s to become of Brian and Andrea Rodriguez? Is an apartment at Second Street Studios in their future? They hope not. The development doesn’t expect to open its doors until 2018, and the couple hopes to be off the streets long before then. Brian still has a valid commercial driver’s license, and he’s actively looking for work. Ideally, he’ll find something before the rains of El Niño hit.