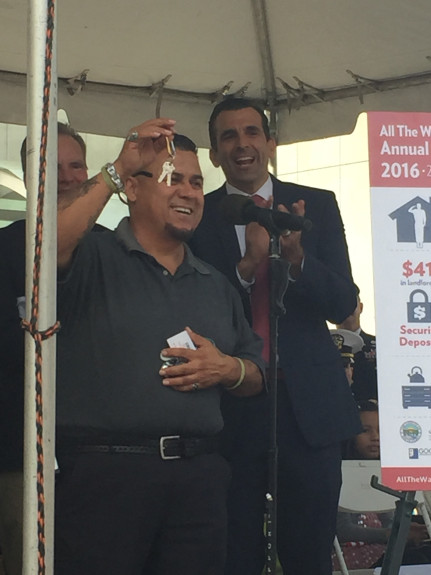 A veteran shows off keys to his new home Friday. The All The Way Home campaign has housed 510 homeless vets so far (photo credit: Jennifer Loving).

SAN JOSE — Surrounded by rows of soldiers and sailors, elected leaders on Veterans Day announced that 510 homeless veterans have been housed under a campaign launched last year called All The Way Home.

“No man or woman who has served our country should be homeless in our streets,” said Santa Clara County Board of Supervisors President Dave Cortese. “Santa Clara County is committed to ending this crisis one landlord at a time.”

Cortese joined with San Jose Mayor Sam Liccardo, Vice Mayor Rose Herrera, and a number of other elected officials Friday to make the announcement. But the work is not done yet.

All The Way Home is a first-of-its-kind collaboration between San Jose, the county and the county’s Housing Authority and Destination: Home, a nonprofit that tackles homelessness. It was launched on Veterans Day last year.

“Today, we can proudly celebrate the significant progress we have made to house homeless veterans,” Liccardo said. “However, we cannot take our foot off the gas or forget the heroes in our community who still need help. By working together, we will end veterans homelessness in our county by 2018.”

The goal of the All The Way Home initiative is to house all of the estimated 703 homeless veterans which make up about 10 percent of the 6,556 homeless people living in Santa Clara County. Advocates are hoping to end veteran homelessness in the county by 2018.

The Board of Supervisors in March allocated $500,000 in landlord incentives to make it easier for them to rent to a homeless vet. About $410,000 of that funding has been used to provide “gratitude” bonuses to landlords and security deposits to house 148 veterans and their families.

County leaders also increased ongoing funding for supportive housing programs for homeless veterans by $1.8 million annually. Then in June, the San Jose City Council set aside $5 million to launch a rehabilitation program — another incentive for landlords to rent to those who served our country.

In August, city and county leaders called on churches and other faith organizations to help by offering similar incentives. Leaders said roughly 260 veterans in Santa Clara County have vouchers for subsidized housing, but still can’t afford to rent in Silicon Valley.

Jennifer Loving, executive director of Destination: Home, said the initiative was successful because of the groups working together to set “a collective and ambitious goal.”

“And everyone committed to bringing their unique resources to the table,” Loving added. “This is how our community can and will end veteran homelessness.”