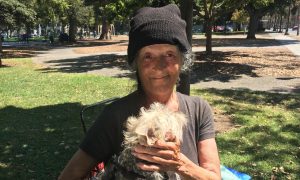 Chants of “build a wall” rang through the meeting room in the Silicon Valley city of San Jose. But this was not a call for a barrier along the Mexican border – it was a cry to exclude homeless people.

At the gathering convened by a city councilmember last week, several hundred locals met to discuss a controversial plan to build emergency housing in this affluent city, and get a handle on the homelessness crisis roiling it.

One woman said she opposed the shelters because of possible negative impacts on owls and elk. One man made an obscure reference to A Modest Proposal, Jonathan Swift’s 18th-century satirical essay that advocated for poor Irish people to escape poverty by selling their children as food to the rich. The man suggested – probably also satirically – that San Jose consume its homeless population.

For Sergio Jimenez, the councilmember who called the meeting, the chant had a particularly unwelcome resonance. “I’m Mexican, a Mexican immigrant, so ‘build the wall’ certainly doesn’t sit well with me,” he said in an interview later.

In San Jose, a city of 1 million people and the headquarters for tech companies such as Adobe and PayPal, the plans to place homeless residents in “tiny home” villages have proved spectacularly contentious.

On any night in San Jose, over 3,000 people sleep on the streets but there are only around 1,000 shelter beds. The city has proposed building one village in each of the 10 city districts, with no more than 20 homes in each.

The homes would measure 70 to 80ft for a single person, and 120 sq ft for couples, with a bed, lockable door and space for storage. They would lack plumbing and municipal electricity, and would likely have solar-powered overhead lighting and a single outlet. Communal facilities would be provided in a central block.

The houses are intended as stopgap until permanent housing becomes available. As California real estate becomes increasingly unaffordable – fast-food workers and cashiers must compete with those on tech salaries – San Jose is looking everywhere for solutions.

While cities in the Pacific north-west have already embraced the tiny-home concept, San Jose’s seems to be the most ambitious plan yet. It is converting motels into housing and passed legislation allowing churches, mosques and other places of worship to permanently shelter people. There are over 500 homeless housing units in the pipeline. And last year, voters resoundingly approved a $1bn, taxpayer-funded, county-wide bond measure to provide additional housing for vulnerable populations.

Still, while residents are willing to tax themselves to help homeless people, it’s a different question when it comes to them living next door.

After city staff designated 99 city-owned parcels of land to evaluate as possible tiny-home sites, residents crowded into community meetings. While many support the plan, angry voices have been loudest. Several petitions criticizing the concept, with a total 5,027 signatures, have been created.

Homelessness advocates are incensed. “This is one of Silicon Valley’s most important civil rights issues,” tweeted Jennifer Loving, executive director of Destination:Home.

Several miles south of downtown, the neighborhood of Thousand Oaks is one of those that has organized. Around the district’s eponymous, square park there are well-kept suburban homes with basketball hoops and American flags. A patch of land bordering one side of the park has been earmarked for consideration as a tiny-home village.

He emphasized that he believes in charity, though not for homeless people who, in his view, have chosen to live as they do. (This idea, while widespread, is highly contestable.) Like other residents, he said he was afraid for the safety of children, and frustrated the neighborhood was barely consulted on the plan.

“I have family who are homeless but I’m not gonna let them live in my house, live on my street corner,” he said. “I think it’s a great idea if you wanna put people up in a house, some facility,” he added later, “but don’t build it in my backyard.”

In the park, a Russian woman in a tie-dyed outfit who has lived in San Jose for 16 years was walking her two large setters. Svetlana, 42, who declined to give her surname, resides in the next neighborhood over, but said she wasn’t bothered by the thought of a homeless settlement nearby. She spoke admiringly of a homeless man who had offered water to her dogs, and chalked up the outcry to a quirk of national character.

The ethics of putting people in structures reminiscent of garden sheds have been questioned. Barbara Poppe, a former head of the federal homelessness agency, has said that refugee camps offer a higher standard of living. But in Seattle, an evaluation of city-sanctioned encampments, including tiny-homes, was approving. It found that they did not cause a significant increase in crime, and around one-quarter of residents eventually moved into permanent housing.

“I’d be the first one to sign up,” said a 65-year-old woman who gave her street name, Chata. She has been on the streets for over three years, after being ejected from a series of homes, and showed a reporter her gnarled toe, which she said was due to be amputated and prevented her from walking properly.

“I don’t understand why [the city] can’t help me,” she said.

Nearby, two men welcomed the idea, but predicted that homelessness would only worsen. “They’re gonna build a campus here for Google,” said Terry Hammer, who had been homeless until two weeks ago. He said that owing to the tech giant’s efforts to purchase property downtown, rents “are just gonna skyrocket”.

His friend, Kenneth, said: “Does it seem odd to you, seeing so many homeless people in Silicon Valley?”

At a raucous City Hall meeting on Tuesday, it became clear that the battle lines had been drawn.

“When my husband and I put our life savings into a house in San Jose in 1997,” said a woman who took the lectern, “I never thought I’d be here asking you not to put homeless pods in our residential neighborhood.”

There was loud applause. The mayor reaffirmed his support for building 10 villages, and the meeting broke up with a resolution to pursue a few pilot projects and consider other locations, punting rather than resolving the question.