Anthony King is a member of our community’s new Lived Experience Advisory Board. The Board is a leadership development body consisting of members with current or past experience of homelessness. Members use this platform to learn about and evaluate the system of care and to make recommendations for improvement.

In this first conversation as part of a new Guest Blog Series, Anthony talks with us about his journey to housing and his vision for the Board.

Who is Anthony King?

I am 48 years old and was homeless for 15 years, off and on, until 2013. Before I lost my home, I was a quality assurance engineer for a plastics company here in Santa Clara County, but  they had to move north because water rights were not as strict for manufacturing companies up there. While my pay was considerable, it wasn’t enough to want to move north with the company.

After that, I had a lot of time on my hands and wound up hanging out with friends from high school. A lot of them were making fast money selling drugs. I thought to myself, “I am smarter than they are. I went to college. I could probably do what they do. As soon as work picks up, I will stop.” Well, because I was naive and tried to be something that I wasn’t, I wound up succumbing to the very drug I was selling. That is how I opened the door to homelessness.

Why a Lived Experience Advisory Board?

When I was housed in 2013,  a lot of times I felt that there should be someone for me to talk to who is not tightly wound up in the [official homelessness support] system, someone who could really understand my point of view.

If you look at any other type of service industry, there is always some kind of focus group where people who are the receive the services products are given the chance to give their opinion about the service and the system around it. I always felt that there should be something like that here; that there should be more homeless or formerly homeless individuals talking about what’s going on.

What is it like to participate on the Board?

The board is still pretty new. With all things new, there is a growing period. Even during the first meeting, I could tell everybody was asking themselves: “How can I leverage this platform to be able to help those who come from where I come from?”

I want my peers and I to learn more about the intricacies of how the Continuum of Care works. I want to to serve my peers and give back. It’s like ants. The first ant goes out and finds something and brings it back so all the ants know what’s going on. I want it to be like that. I want my peers to be able to share with the next set of peers, no matter if they are still experiencing homelessness or if they have managed to walk away from it.

Whatever your endeavor, the best person to help you is someone who has already experienced it. There needs to be someone there to support and walk with someone who is in a traumatic situation.

Sometimes case managers, program managers, and direct service providers do not have time to quell an individual’s anxieties. A peer who has already been through the system should be there to help them. The Lived Experience Advisory Board (LEAB) is a great platform for that.

What’s the future of the Board?

I hope that Board members will be part of every component of the Continuum of Care in Santa Clara County. I hope to be on the Continuum of Care board, and play a major role to help people who dispense services understand what works and what doesn’t work in real time. Instead of waiting until the year is over and looking back to see what might have gone wrong, we should do it right in the moment.

Can you tell us about your work with Silicon Valley De-Bug?

Currently, I have a fellowship with the Silicon Valley De-Bug organization, an online social justice collaborative. We allow people experiencing homelessness inform the public about their experience in their own voice. Visiting the De-Bug office in 2013 to get a copy of a video started my process of involvement with them.

I learned about De-Bug when I lived in an encampment that basically formed overnight when about 100 tents popped up. Later, the day before the encampment was set to be officially closed by the city,  three guys came to the encampment and recorded a video with about the encampment closing.

Back then, I was deep into a methamphetamine addiction, so wasn’t really paying attention to the news. Two weeks later, I find out that the video had spread everywhere and that De-Bug was trying to help me and my peers. At the time, my family didn’t know I was living on the streets. They thought I was living in a shelter. I wanted to show my grandmother the video and tell her about my situation before she saw it on the news, so I went to the De-Bug office to get a copy of the video. 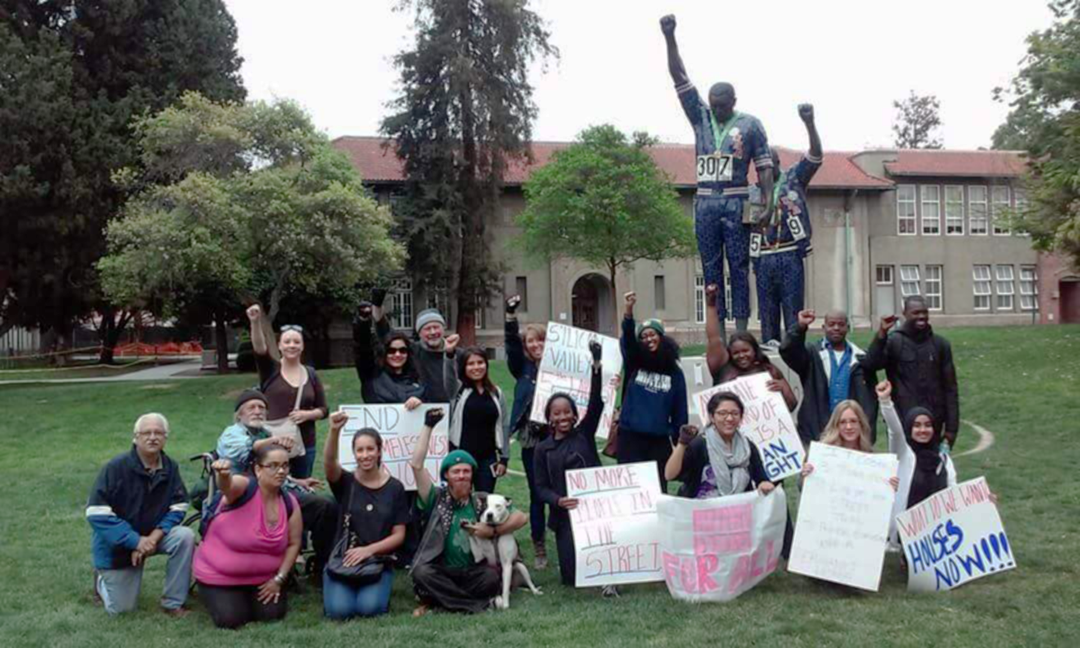 Once I had the video, I sat down with my grandmother and watched it with her. I thought she would be mad at me, but doubled down instead and began visiting me at least once a week–no matter where I was camping–to make sure I was alive, to take me to a laundromat, and to go out to lunch. She would ask me, “What are you doing to get off the streets? What are you doing about your addiction?” She motivated me more than anything.

I moved into my place the day before Thanksgiving. Before that, for major holidays, I would go to my grandmother’s house and then have to go back to the streets. There was always some lie involved since she thought I was living in a shelter.

Then I moved into a home. That holiday, I could go home. I could just go home and sit within my four walls. At the same time, a record-setting cold spell took the lives of four homeless people.

It really hit me that I was at home, but people that I know and that I call family were still out on the streets. I thought, “What can I do that is more than handing out sandwiches or coffee?” I started off passing out blankets, then started making spaghetti and passing it out to people who lived on the streets near my new home. When I started to meet people, I would tell them about how I got a job and housing.

When trying to develop relationships with some of my peers, I learned that you can’t just walk up to someone and say, “What are you doing about your housing? Come with me and fill out this form and try to get you housed.” There are layers of resistance. At many different points, the system failed them.

In getting people to use the system, you have to start off small. You ask people if they want to use your shower. You slowly wash away the resistance. I started doing this a few years ago. Some of the people I talked to a long time ago have only now come back and started asking how they can sign up for housing.

Before I became homeless, I was a firm believer in our safety net system. I never had to utilize it, but I thought my tax dollars were being used wisely. Then I lost my home and I had to engage with that system. At times, it failed me.

This blog post is part of a new Destination: Home Guest Blog Series. The purpose of the series is to raise up the voices of our partners and highlight our collective work to end homelessness in Santa Clara County.