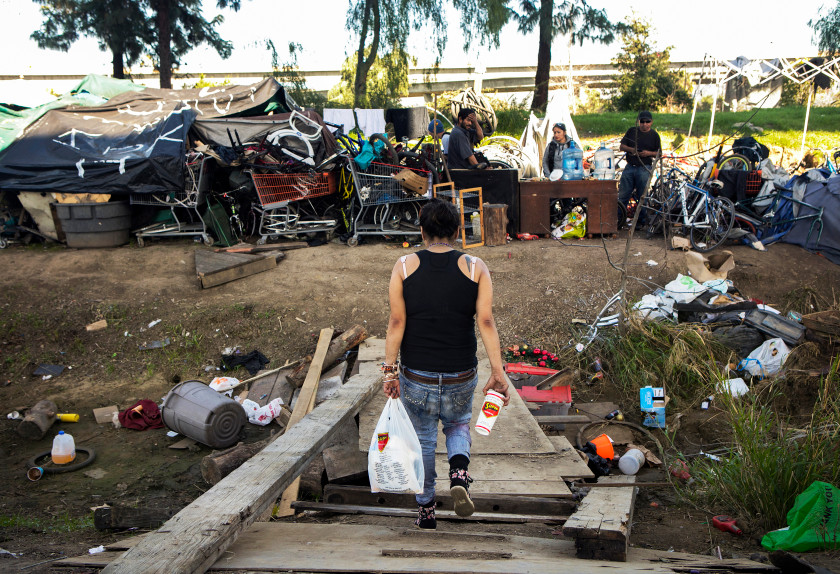 A woman walks toward friends at a homeless encampment where she lives next to the Interstates 101 and 280 in San Jose, California, on Saturday, February 3, 2018. (LiPo Ching/Bay Area News Group Archives)

The $950 million bond measure passed in 2016 and designed to build 4,800 housing units is ahead of schedule

The best gifts are worth the wait.

Two years after Santa Clara County voters passed Measure A there is great progress to report on the $950 million Hail Mary pass to end the homelessness crisis.

It’s working. Call it the holiday present of the year.

Consider this. Prior to the 2016 vote, Santa Clara County had only 247 supportive units for those in desperate need.

The Board of Supervisors will hear Tuesday that the county and a multitude of partners will soon add 1,537 units. A staff report indicates that 151 are in operation, 586 are under construction and another 800 are in the pipeline. That equates to nearly one-third of the total units for extremely low-income and very low-income households promised to voters in 2016. For the hundreds who have been working on the effort, take a bow. The work deserves to be celebrated.

In a perfect world, the estimated 7,000 homeless people in this county wouldn’t have to wait another day for the 4,800 units promised by Measure A. It’s heartbreaking during the cold, wet holiday season to see the homeless searching for a dry spot to spend the night. But building housing projects — especially for the county’s most vulnerable population — takes time. City-county cooperation is needed to secure sites in neighborhoods that often contain a vocal NIMBY contingent. Funding must be locked into place. Rent vouchers must be secured. And essential supportive services must be located nearby to give occupants the best chance of succeeding in their new homes.

Think about it. Government often works at a crawl for even the simplest projects. But the county is ahead of schedule on its 10-year Measure A implementation plan.

If, as expected, the Board of Supervisors on Tuesday approves nine new housing developments, the county will have allocated $234 million (29 percent) of the $800 million of bond funds for housing extremely low-income and very low-income populations. The remaining $150 million of the $950 million voters approved is being allocated to fund loan programs for low-income, first-time homebuyers.

If the Measure A timetable continues on its current pace, the county expects to open a total of 817 units by June of 2021, including:

Measure A won’t eliminate the homeless problem altogether. But putting the homeless in warm, basic apartments surrounded with the services they need not only relieves their suffering, it also saves taxpayer dollars. Independent research revealed that the county spends in the neighborhood of $500 million every year on emergency room care, public safety and other services for the homeless.

Anyone driving through the county knows there is still a lot of work to be done getting people off the streets. But Measure A is starting to fulfill the promise advocates made to voters in 2016 that it could turn a county with one of the worst homeless problems in the nation into one providing a model solution.