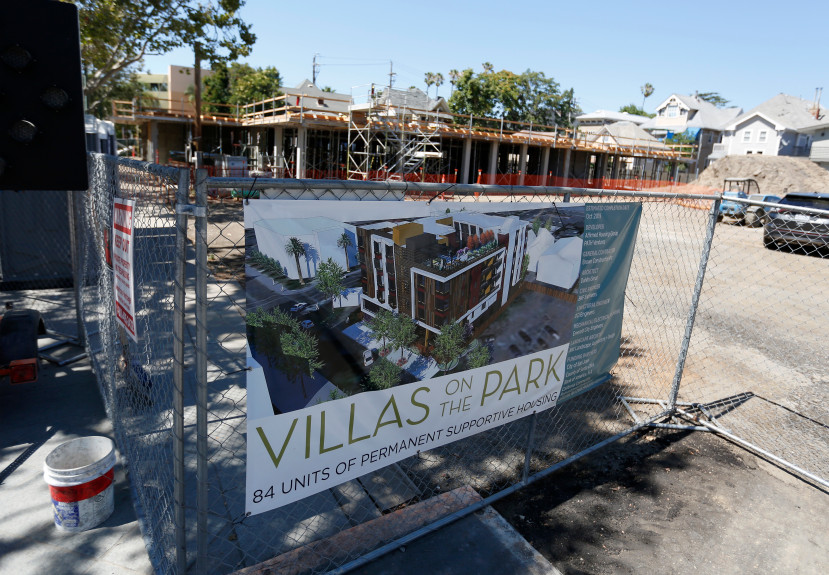 Construction for “Villas on the Park,” on N. 2nd St., expected to be finished in October 2019, in downtown San Jose, Calif., on Monday, July 23, 2018. “Villas on the Park” will include 83 affordable units (plus a managers unit for a total of 84 units) and it will be “downtown San Jose’s first development with 100% supportive housing for people experiencing homelessness.” (Nhat V. Meyer/Bay Area News Group)

County is ahead of schedule in using housing bond funds

More than 1,000 new and rehabbed affordable homes could be coming to Santa Clara County — the latest projects to spring from a massive 2016 housing bond and a milestone that advocates say will help the region’s poorest residents.

The Santa Clara County Board of Supervisors is expected to approve funding for construction of six new affordable rental projects and the rehabilitation of three existing buildings, using money from the $950 million housing bond that county voters narrowly passed two years ago. If the latest units are approved, the Measure A bond will have funded 19 projects over the past year and a half — putting the county ahead of schedule in allocating the money and meeting its housing goals.

After the state dissolved redevelopment agencies in 2012, drying up what had previously been a major source of funding for low-income housing, many local cities and counties asked voters to replenish their coffers by approving new bonds and taxes.

In Alameda County, voters in 2016 approved Measure A1, authorizing $580 million in bonds for affordable housing. So far $81 million of that money has gone toward building 1,100 affordable homes, said Wilma Chan, president of the Alameda County Board of Supervisors. San Mateo County voters in 2016 approved extending a half-cent sales tax through Measure K, which so far has led to the completion of more than 200 new affordable units and financed hundreds more still in the pipeline. In Oakland, voters approved a $600 million infrastructure and affordable housing bond in Measure KK — at least $13.5 million of which the city put to use last year to fund at least 600 affordable units.

This year in San Jose, a $450 million affordable housing bond failed at the polls with 64 percent of the vote — just under the 66 percent it needed to pass. At the same time, state voters passed Propositions 1 and 2, authorizing $6 billion in state-wide bonds for affordable housing and home loans.

In Santa Clara County, Measure A squeaked by in 2016 with 68 percent of the vote — just over the two-thirds needed to pass. County officials expected to allocate about $95 million of those funds each year, but if supervisors approve the latest nine projects Tuesday, the county will have committed almost three year’s worth of money in a year and a half. And with those nine new projects, the county will have met 30 percent of its 10-year goal to add 4,800 affordable units to its housing stock.

“So we feel like we’re ahead of schedule,” Le said, “but I want to knock on wood.”

New affordable units are desperately needed, said Jennifer Loving, CEO of nonprofit Destination: Home, which seeks to reduce homelessness in Silicon Valley. The average rent for a two-bedroom apartment in San Jose is $2,877, according to RentCafe, and many residents can’t afford that price tag. The solution is to build more affordable housing — especially housing for the region’s poorest residents — but in past years the region hasn’t produced nearly enough units, Loving said. Santa Clara County needs 58,583 more affordable rental homes to meet the demand for low-cost housing, according to data from Destination: Home.

In Alameda County, the Board of Supervisors is set to vote next month on a proposal to spend another $85 million of its Measure A1 funds to build at least 1,000 more units of affordable housing, Chan said. “I think we’re doing pretty well,” Chan said. “I’d like to see us go faster, but in terms of numbers, we’re probably on target.”

Louis Chicoine, executive director of Abode Services, which builds housing for the homeless, said he is frustrated by what he sees as delays in Alameda County making use of its bond funding. Chicoine, who is working on six housing projects in Alameda County and four in Santa Clara County, said the backlog has made competition for Measure A1 funding intense among developers in Alameda County.

“We’re worried about some of our projects even happening,” he said.

Chan said the delays have been caused by uncertainty about how much funding developers can expect from the federal government’s new administration, and whether county supervisors can dole out bond money before the bonds are actually issued.