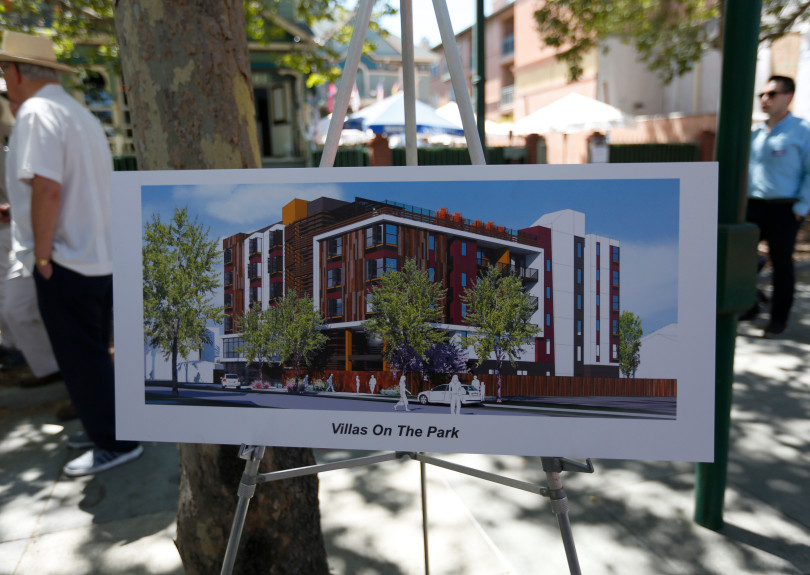 An artists rendering of “Villas on the Park” on N. 2nd St. in downtown San Jose, Calif., on Monday, July 23, 2018. “Villas on the Park” will include 83 affordable units (plus a managers unit for a total of 84 units) and it will be “downtown San Jose’s first development with 100% supportive housing for people experiencing homelessness.” (Nhat V. Meyer/Bay Area News Group)

Believed to be the first city in the country to take such a step, San Jose is set to devote 45 percent of its available affordable housing funding toward extremely low-income residents at the greatest risk of falling into homelessness.

The move could help hundreds, perhaps thousands, of families who meet the required income threshold. Though the income level varies, a family of three making about $35,000 a year, for example, would qualify.

“As you all know, these are the most vulnerable members of our community,” said David Low, a spokesman for Destination: Home, a homeless advocacy organization that supported the proposal unanimously approved at Tuesday night’s San Jose City Council meeting.

“Oftentimes, I think we forget the folks on the bottom rung of the ladder,” said Councilman Sergio Jimenez.

Nearly three-quarters of these residents spend more than half of their income on rent, Councilwomen Maya Esparza and Dev Davis said in a memo, arguing that adding more affordable housing will help prevent further homelessness.

“We have a housing supply problem and we’ve had it for a really long time in the Bay Area,” Davis said at the council meeting. “We know we have to do better and we can do better.”

In endorsing their colleagues’ memo, Councilman Sergio Jimenez and Councilwoman Sylvia Arenas pointed out that the city had come close to meeting its market-rate housing goal.

“We owe our most vulnerable residents a stronger commitment,” the pair wrote. “These same residents are critical to our economic prosperity by virtue of their employment in the service industry, construction and other fields essential to our growth. It is in our best interest to guarantee that they can afford to live in San Jose.”

But Mayor Sam Liccardo said the city needs to add all levels of housing, pointing out that market-rate developments can help fund affordable units.

“We just need a lot more at all levels of income,” Liccardo said. “We need both.”

After residents narrowly defeated a 2018 affordable housing bond measure, Liccardo said the city is considering another measure in 2020 and exploring partnerships with foundations, although he declined to provide specifics.

Councilman Raul Peralez, who represents the downtown area, said he supports affordable housing developments but called on other council members to champion them in their own districts. It is getting “harder and harder,” he said, to convince his constituents they are a good idea when the developments are largely concentrated in one part of the city.

Jimenez thanked Peralez for his effort and said he’d pushed back at residents in his own district who opposed such a project.

“Even though it’s challenging,” he said, “I believe it’s the right thing to do.”

Even though it won’t add to the overall housing stock, the City Council voted to devote the money to buying and rehabbing market-rate units as affordable. Developers will be able to propose purchasing a property with some city financing if they agree to an affordability restriction.

The move will “open the doors to creative solutions” to the region’s housing crisis, said the city’s housing director, Jacky Morales-Ferrand.

The need is pressing. Now, more than 40,000 families qualify for extremely low-income housing. Yet, there are less than 3,000 units available.

And even for families making a little more money, the housing supply is short and the city is nowhere near meeting its goal to add 10,000 affordable homes by 2023. By the end of the first year, 2018, the city was only about 20 percent of the way to that target. At the current pace, the city will only get 58 percent of the way there within five years.

According to the Housing Department, it would take a massive injection of funds — more than $520 million — to reach the ultimate 10,000 goal.

“We need to continue to work toward finding additional revenue for affordable housing,” Morales-Ferrand said.